From Sirikata Wiki
Jump to navigation Jump to search

At the highest level, Sirikata is composed of three parts, the space, the object hosts, and the content distribution network:

Object Host
Simulates object behavior in the world by running scripts. User clients are object hosts that also know how to run a display.

Space
A collection of one or more servers that simulate the world. Mediates interaction between objects, such as physics and communication.

Content Distribution Network
Stores semi-permanent to permanent data and delivers it to the other components. For instance, meshes that are used to display objects are stored on a CDN and client object hosts can download them to view the world. 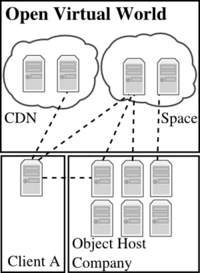 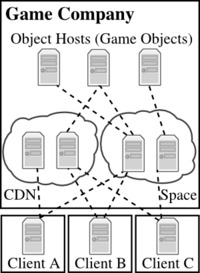 These images show two ways to deploy Sirikata. In the first, one company runs the infrastructure for the world (space), but leaves other services up to users and third parties. In the second, to ensure game rules are enforced and a good user experience, the game company runs all servers except for object hosts acting as clients.

The rest of this document gives a little more detail on these components, but tries to remain non-technical. For more technical detail, look at the Platform Development Guide.

The space is what you might think of as the laws of the world: it isn't the objects but the set of rules they must follow and how they interact with each other. In Sirikata this boils down to only a small set of services: the space manages objects locations, physics simulation, lets objects learn about other nearby objects, and enables those objects to communicate with each other. All the rest of the functionality of the world can be built on this very small base.

The earlier examples of deployment suggest how object hosts might be used. In an open world, anybody running an object host can connect to the space. The owner adds their scripted objects, which connect to that space and start interacting with other objects. They might add code while they are in the world to extend the behavior of objects, perhaps teaching it how to interact with a new type of object or provide a new service to other avatars.

The above described the high level components of Sirikata and below we list the available implementations. To run a world, you'd select at least one implementation for each component and tie them together. Within implementations there may be a lot of configuration flexibility as well. For example, the C++ implementation has a wide variety of plugins and feature toggles.