A Tour of the Sirikata Code

In order to extend or modify the Sirikata code, you'll need a basic understanding of the components involved and where to find them in the code base. If you aren't already, be sure you are familiar with the high level components of the system described in :ref:`general-architecture`. This tour will build on these three.

The Sirikata implementation is broken down into libraries, binaries, and plugins.

Libraries hold the bulk of the common functionality and all the exported interfaces in the system. They are organized logically based on high level tasks. By keeping most of the code in libraries it is reusable: they contain all the components or interfaces but don't full connect them.

The binaries put the pieces together, making sure all the necessary components for a service are available, instantiate them, connect them, and manage the service. Binaries are usually pretty minimal since they mostly connect components available in libraries or plugins. Usually developers won't need to add new binaries unless they are adding a truly new service to the system: the existing binaries can be customized via plugins. However, if you needed some custom functionality not addressed by the system, for instance to perform additional logging for which there isn't an interface it might require creating a custom binary.

Finally, plugins contain the specialized functionality of the system. Plugins usually contain an implementation of an interface from one of the libraries and add it to a factory so a binary can instantiate it. This is probably the most common location for code modifications -- the libraries and binaries are setup to provide most of the functionality expected -- allowing you to add implementations with different properties (e.g. storage for object scripts backed by a system with strong durability guarantees) or just to extend the features of an existing plugin (e.g. add some new utility API for a scripting language).

Navigating the code base is made simpler by following a small set of conventions.

Of course there are some additional directories that don't follow these conventions, but they are easily identified. Examples include the scripts and build directories.

As an example, here are is the directory layout for a few items in the repository:

In this example, libcore has a plugin local in addition to its include and src directories. It also has some unit tests associated with it, stored in a separate test directory. The space binary only has a source directory.

A Tour of the Libraries and Binaries

At a high level, the system is broken down into two binaries which clearly map to the space and object host components:

As mentioned earlier, these binaries should be minimal. They should instantiate implementations (in plugins) of interfaces (in libraries). Therefore, they depend on a number of libraries: 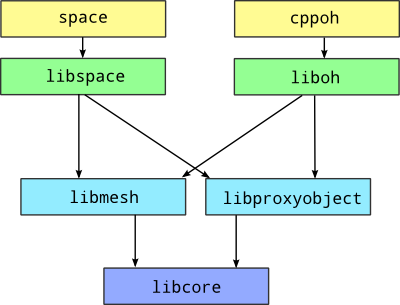 Since plugins are stored within the directories of the library they are associated with, most code specific to a space is under libspace and most code specific to object hosts is under liboh. However, code useful to both appears in the other libraries, upon which libspace and liboh depend. The separation of these core libraries is simply to logically partition the code to make it more manageable. Note that there are direct dependencies that are only implicit transitively in the image. For instance, both liboh and libspace depend directly on libcore, but this is only implied by their dependence on libmesh and libproxyobject.

You may also notice that the content distribution network is missing from this description. Currently, the CDN uses stock web servers, so its implementation is separated and not referenced in the remainder of this guide. It can be found in the cdn directory. Access to the CDN is provided in the transfer directories in libcore since it is used throughout the system.

You'll notice that there are some additional directories for libraries and binaries:

These won't be discussed further in this guide as they are more would require more detail than this guide aims to give.